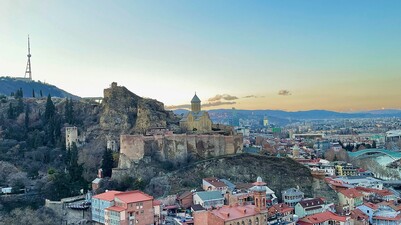 View on the city © Wikimedia Commons

Between the Orient and the Occident

Tbilisi (Tiflis, Tbilissi, თბილისი, Тбилиси, Τιφλίδα), the capital city of Georgia, is the sixth venue for the EVROVIZION project. As a result of Georgia’s geographical location – sandwiched between the Black and Caspian Seas, Asia and Europe, and the Orient and the Occident – Tbilisi has repeatedly found itself at the mercy of major powers.

Over the centuries, Tbilisi has been conquered by the Persians, Ottomans and Russians, and each time it was integrated into the empire of its conquerors. From 1801 until 1918, Georgia was part of the Russian Empire, followed by a brief period of independence that came to an end when the Red Army invaded in 1921 and the country was annexed by the Soviet Union, of which it remained a part until Georgia declared independence in 1991. This 190-year period has had a major impact on the country. As a result of military conflict with Russia in the 2008 Russo-Georgian War, two regions that are internationally recognised as part of Georgia – Abkhazia and South Ossetia – have become de facto states that are closely tied to Russia. However, a majority of the country – and the people of Tbilisi in particular – would like to join the European Union. Tbilisi is also the centre of cultural life in Georgia, with numerous museums, universities, cinemas and theatres. The varied cultural influences to which the country has been exposed are particularly evident in the city’s architecture, including the old town with its medieval street plan and building structure, as well as places of worship for various religions.

The Georgians not only have their own Caucasian language, but also their own alphabet, with 33 artfully curved letters whose origins can be traced back to the third century AD. This alphabet is not related to either the Latin or Cyrillic alphabets. Thanks to its language, the country has been able to maintain its identity despite being occupied on numerous occasions.