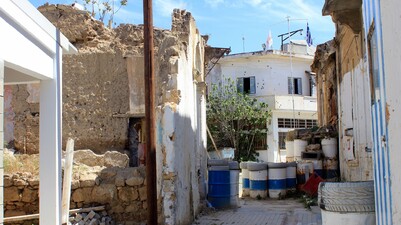 Europe’s Last Divided City
Nicosia (Λευκωσία, Lefkosía, Lefkoşa, Λήδρα, Lēdra), the fourth venue for the EVROVIZION project, is currently the last divided city in Europe. It is the capital city of the Republic of Cyprus, and the northern part of the city is the de-facto capital of the Turkish Republic of Northern Cyprus, which is not internationally recognised. The so-called Green Line across the middle of the island that runs through the city of Nicosia – a demarcation line and a border that can be compared with the Berlin Wall – has divided the Republic of Cyprus and the Turkish Republic of Northern Cyprus since 1974. In 2003, the two parts of the city were once again made freely accessible to both populations, which go back to the original Greek population and the Turks that began settling here in the sixteenth century. In the course of British colonial rule in the early twentieth century and Cyprus’s independence in 1963, there were frequent conflicts between these two groups and calls from each for their own independence. In 1974 this conflict culminated in the occupation of Northern Cyprus by Turkish armed forces and the division of the island and its capital Nicosia.