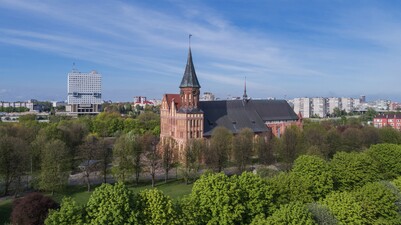 Russian island in the EU

KALININGRAD (Калинингра́д, Königsberg, Kjonigsberg, Кёнигсберг) is the eleventh venue for the EVROVIZION project. It is the capital of the ‘Oblast Kaliningrad’, and since 1945 it has been a Russian ‘island’ and exclave in Eastern Europe. It is located between Poland and Lithuania on the southeast coast of the Baltic Sea. Kaliningrad is the westernmost major city in Russia. Today, the city boasts universities, monuments and places of worship that are reflective not only of the area’s cultural diversity, but also of Kaliningrad’s Prussian and Russian heritage.

The birthplace of the philosopher Immanuel Kant – known today as Kaliningrad – was part of East Prussia until 1945, when it was invaded by the Red Army. For nearly 700 years, the city had been called Königsberg and was known for its cosmopolitan and educated populace. As a result of the Russian annexation, its German residents were expelled and replaced by Russians who were resettled in the region. The territory was declared a restricted military area and foreigners were forbidden to enter Kaliningrad until the fall of the Soviet Union in 1991. It was only after this that interest in rediscovering the city’s German past and then in restoring the remains of its historical structures began to grow. Today, the city boasts universities, research institutes, museums, monuments and places of worship that are reflective not only of the area’s cultural diversity, but also of Kaliningrad’s Prussian and Russian heritage.