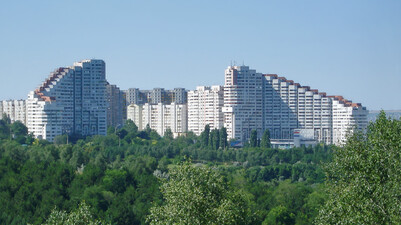 A country of children

CHIȘINĂU (Kischinau, Chișinău, Кишинэу, Kischinjow, Кишинёв, Kişinöv), the seventh venue for the EVROVIZION project, is the capital city of the Republic of Moldova and was formerly the capital of the historical region of Bessarabia. In her novel “Kinderland” [A country of Children] published in 2015, Moldavian-born Liliana Corobca depicts her homeland as a country of children, because so many people have left the country to work abroad that children and the elderly make up much of what is left.

In the 16th century, Chișinău was part of the Ottoman Empire, and early in the 19th century it was incorporated into the Russian Empire. Over the course of the 20th century, Chișinău moved back and forth between Romanian and Soviet control, and the effects of this are evident to this day. Both Chișinău and the Republic of Moldavia have been – and continue to be – home to ethnic conflicts, including the Jewish pogrom of 1903 the persecution of the Jews during the Second World War, and the detachment of Russian and Ukrainian ethnic groups with the de facto state of Transnistria in the east and of Turkic-speaking people with the establishment of the autonomous region of Gagauzia in the southeastern part of the country. Even so, the city’s architecture and Chișinău’s cultural, social religious life continue to be characterised by diverse ethnic influences.