Amila Ramović is a musicologist and curator from Sarajevo. She is an assistant professor at the Academy of Music and the Academy of Performing Arts at Sarajevo University. As part of the EVROVIZION project, Ms. Ramovic should moderate the symposium, which was planned for June 25, 2020 at the Historijski Muzej Bosne i Hercegovine.

Amila Ramović is a curator and musicologist from Sarajevo. She was part of the team of the Ars Aevi Museum of Contemporary Art in Sarajevo from 2000, and its executive director from 2005 to 2017. She has organised dozens of exhibitions and educational projects in the field of contemporary art, and curated exhibitions including: Braco Dimitrijević’s solo exhibition at the Venice Biennale in 2009 and in Sarajevo in 2010; Sing Sing group members in Reggio Emilia, Italy, in 2009, in Sarajevo, BIH, in 2011, and at the Museum of Modern Art in Saint Etienne, France, in 2012; John Cage Happy New Ears in Sarajevo in 2013; Peter Ablinger in Sarajevo in 2014; Memories in Stone at the National Museum of Bosnia and Herzegovina in 2018; Bojan Stojčić at the National Gallery of Bosnia and Herzegovina in 2020.

She holds a PhD in musicology and is an assistant professor at the Academy of Music and the Academy of Performing Arts of the University in Sarajevo. In 2015 she joined the faculty of film.factory found by Béla Tarr in Sarajevo. Her collaboration with Tarr continued through his most recent projects, working as an associate curator for the Till the End of the World exhibition at the Eye Museum Amsterdam in 2017, and for Missing People – a shown at the Wiener Festwochen in 2019. In 2018 she was elected president of the Musicological Society of Federation of Bosnia and Herzegovina. In 2019 she became an honorary fellow of Plymouth College of Art. 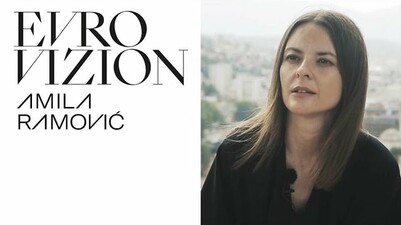