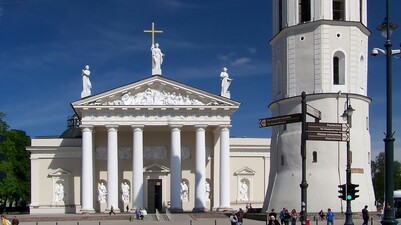 VILNIUS (Wilno, Вільня, Wilnja, ענלי ו ו , Wilne, Вильнюс, Wilnjus), the tenth venue for the EVROVIZION project, is the capital city of the Republic of Lithuania. The southernmost of the three Baltic States borders on Russia’s ‘Oblast Kaliningrad’, Poland, Belarus, and Latvia. Vilnius was a centre of Jewish life for many centuries, and was considered to be the ‘Jerusalem of the North’ until the persecution of the Jews during the World War II. Today the city is often referred to as the ‘Rome of the East’ on account of the many churches and cathedrals found within its borders.

The history of Vilnius and of its current population has been shaped by a long and tumultuous shared history with the neighbouring nations of Belarus, Russia and Poland. Lithuanians today account for by far the largest share of the population, with Poles being the biggest ethnic minority, followed by Russians and Belarusians. Even today, the city stills hosts a small Jewish population. Vilnius’ churches and cathedrals serve both the Roman Catholic and Eastern Orthodox faiths. Vilnius is one of the oldest university cities in Europe, and its historical old town, which still boasts mediaeval, Gothic, baroque and classical structures, was designated a UNESCO World Cultural Heritage site in 1994.